Government Budgeting and COVID-19 – Advocacy Meeting with Ministry of Finance

On November 9, 2020 an advocacy meeting was held with… Read more

Monitoring Government’s Response to COVID-19 in Nangarhar, Laghman and Kunar

On August 25, 2020, the National Advocacy Committee for Public… Read more

The inauguration session of Citizens’ Forum Against Corruption (CFAC) was held on May 29, 2016 at APPRO’s office in Kabul. Present were 8 representatives of the Afghan private sector, and 9 civil society actors.

APPRO provided an overview of CFAC’s objectives and basic premise, followed by an engaged discussion among those present on ways forward to create a functioning network of committed citizens to protect themselves and their organizations against corrupt officials.

Citizens’ Forum Against Corruption (CFAC) was established in January 2016 by Afghanistan Public Policy Research Organization (APPRO) in partnership with Transparent Elections for Afghanistan (TEFA) and support from the European Union Delegation – Afghanistan. CFAC’s mandate is to create a space, and protective mechanisms, for NGOs and private sector interests that wish to operate according to the rule of law governing taxation and against corruption in Afghanistan. 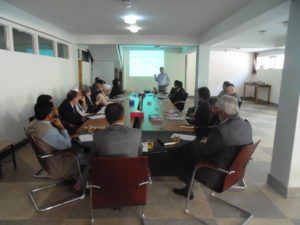 Participants at the inauguration of CFAC